Pain in the Brain and Neural Plasticity

There are several mechanisms that can create a sensation of pain, which has been described as 'an unpleasant sensory and emotional experience in response to perceived or potential tissue damage'. Pain can be the result of peripheral sensitisation from peripheral inflammation, vascular compromise, necrosis, swelling, etc. Importantly, higher centres of the central nervous system not only perceive such sensitization of the peripheral nerve receptors, they can also modulate and control the intensity and tolerability of the perceived sensation through descending modulation at the peripheral receptor and in the spinal cord and through transcortical mechanisms depending on the 'meaning' and 'context given to the pain. Moreover, the higher centres can create a 'state' of perceived 'threat' to the body through emotions such as fear and anxiety. Rather than the brain acting as a filter of unwanted sensation, in the higher centre induced pain state, rumination and magnification of sensations occur to create a pathological state.  Paradoxically, representation of body parts such as limbs and individual muscles can reduce in perceived size. In such instances the pain doesn't represent the sensation of pathology but rather pain has become the pathology. Hence, the brain generates pain in the brain, where the pain is perceived to be some sort of non-existent inflammatory or pathological sensation in the periphery. Evidence for this neural plasticity comes from imaging studies, where brain white matter structural properties have been shown to predict transition to chronic pain (Mansour et al 2013, Pain, 154, 10, 2160-2168). Specifically, differential structural connectivity to medial vs lateral prefrontal cortex and connectivity between medial prefrontal cortex and nucleus accumbens has been shown in people with persistent low back pain. In this case the back pain becomes the inciting event and given the persons' structural propensity, establishes specific functional connectivity strength. Some of these changes, in the neural architecture, might be explained by the fact that roughly 5000 of our 20000 genes which make up the human genome are dedicated to chronic pain 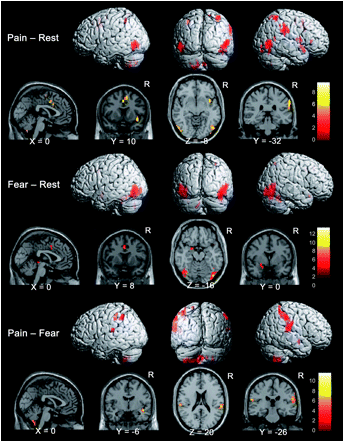 Peripheral input is a powerful driver to neuroplasticity. Information gathered by touch, movement and vision, in the context of pain can lead to mal-adaptive plasticity, including the reorganisation of the somatosensory, and motor cortices, altered cortical excitability and central sensitisation. Examples of somatosensory reorganisation come from the work of Abrahao Baptista when investigating chronic anterior knee pain, who not only demonstrated reduced volume of Vastus Medialis but also is cortical translocation to another part of the cortex. 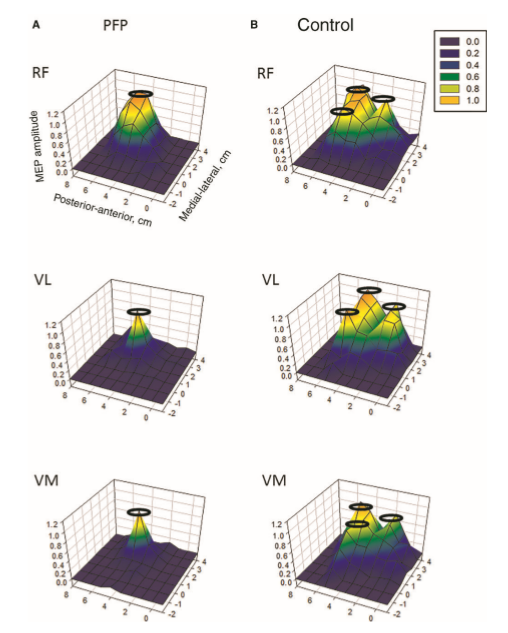 Individuals with patellofemoral pain (PFP) had reduced map volumes and an anterior shift in the M1 representations, greater overlap of the M1 representation and a reduction in cortical peaks across all three quadriceps (RF, VL, VMO) muscles compared with controls.(Te et al 2017 Pain Medicine, pnx036, https://doi.org/10.1093/pm/pnx036) 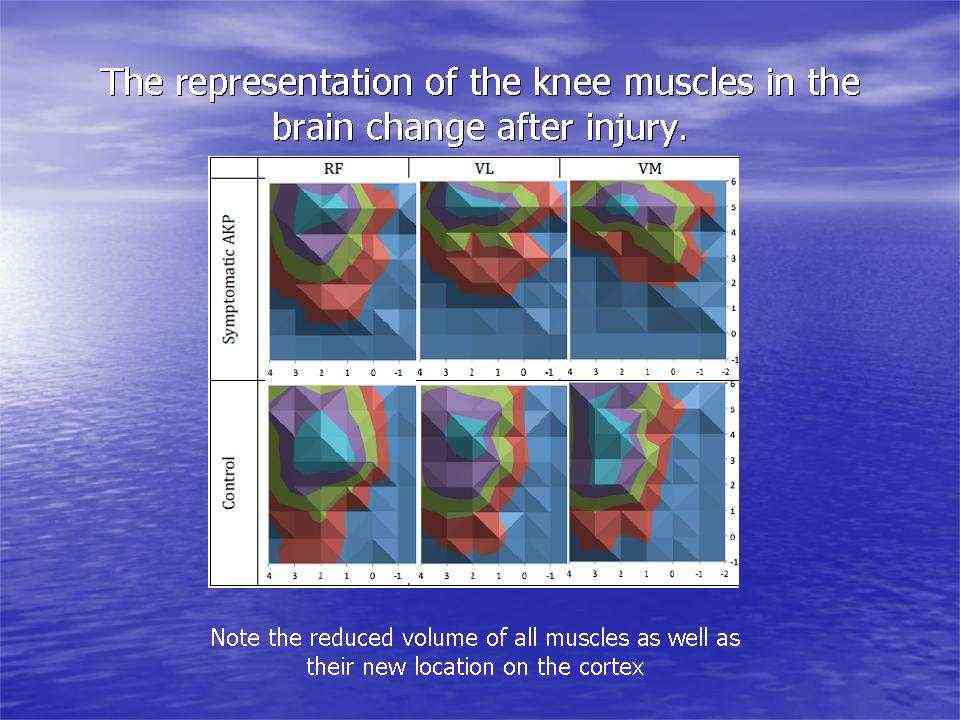 The same researcher (Abrahao Baptista) has shown that maximal tolerable electrical stimulation (eg TENS) of muscles can induce normalisation of the cortical changes through a process called 'smudging'. Transcortical stimulation has also been applied as a cortical 'primer' prior to the application of more traditional therapy such as motor re-training, exercise, and manipulation.

The altered muscle activation around the knee may lead to altered inverse dynamics, energy dissipation and propagation, leading to increased risk of knee osteoarthritis. An increase in just 1% baseline knee adduction moment has been associated with a  six-fold increase risk of radiographic progression of knee osteoarthrits in a 6 year follow up study (Miyazaki et al 2002, Ann Rheum Dis, 61, 7, 617-22).

Lateral ankle sprains occur in approximately 70% of the population. These can become chronic and quite disabling leading to declines in physical activity and its concomitant morbidity. Additionally, in the elderly, this can lead to an increased risk of fractures due to falls. Ruptured ligaments have the capacity to alter the somatosensory input to the cortices, thereby altering in turn, the afferent input from the cortices to the periphery, as evidenced by increased use of hip musculature (Doberty et al 2015, Clin Biomech, 30: 129-135), over-reliance of visual input (Song et al 2017, J Sci Med Sport, 20, 10, 910-914) and the frequent use of external stabilisers such as braces and ankle supporting footware. Speculation of pyramidal grey matter changes in the motor cortices have also been made (Terada et al 2016, PM R, 8, 11, 1090-1096). Such altered mechanics has been associated with changes in the central nervous system microstructure of the white matter in the superior cerebellar peduncle (Terada et al 2019, Med Sc Sp Ex, 51, 4, 640-646). Cause and effect cannot be established, however, clinically, emphasis must be placed on both peripheral tissue issues as well as higher centre processes if the chronic cycle is to be broken.

Motor strategies learned during pain are sustained upon pain-free re-exposure to task.

Adaptations to pain can interfere with movement planning and execution. Researchers have investigated the influence of pain on shoulder and elbow muscle activity during pain and subsequently after the resolution of experimentally induced muscle pain. They found that the same strategy of reduced muscle activation and reduced co-contraction occurred on subsequent pain-free re-exposure to the task (Solomoni et al 2019 Med Sc Sp Ex, 51, 11, 2334-2343). Furthermore, task accuracy was achieved through a concomitant reduction in antagonist muscle activity. Reduced EMG activity was attributed to reduced central neurological drive from higher cortical centres. Although a reduction in muscle activity may seem like a better 'economy' of movement, it places the joints at risk, as the normal, really important, stabilising mechanism during initial learning, of a novel motor task, is compromised.

Body illusions are another novel way to promote the normalisation of cortical function through adaptive neuroplasticity. Examples come from people with hand arthritis, whose perception of their hand size is underestimated (Gilpin et al 2015 Rheumatology, 54, 4, 678-682). Using a curved mirror, similar to that in theme parks, the visual input can be increased to perceive the body part as larger (Preston et al 2011 DOI: 10.1093/rheumatology/ker104 揃 Source:PubMed ) . Irrespective of size, watching a reflection of the hand while performing synchronised movements enhances the embodiment of the reflection of the hand (Whitkopf et al 2017, Exp Brain res, 23, 5, 1933-1944). These visual inputs are thought to affect the altered functional connectivity between areas of the brain thereby affecting the 'pain matrix'.

Another, novel way of looking at movement and pain perception is the concept of the motor engram. This has been defined as motor skill acquisition through the modification and organisation of muscle synergies into effective movement sequences. The learning process is thought to be acquired as a child through experientially based play activity. The specific neural mechanisms involved are unknown, however they are thought to include

Interestingly, it is an intriguing notion that accessing motor engrams from patterns acquired prior to the pain experience might lead a normalisation of brain activity. My personal experience of severe sciatica with leg pain, sleepless nights and a SLR of less than 30 degrees, happened to coincide with training my 9 year old sons soccer training. I was noticing that the nights after i trained the children, I slept much better and my range of movement improved. I commenced a daily program of soccer ball tricks which i had been showing the kids, including 'juggling', 'rainbows' and 'around the worlds'. Eventually, I even took up playing soccer again after a 30 year absence from the sport. Other than new activity related pain issues (DOMS), four years on, the sciatica hasn't returned. I can only conclude that this activity activated dormant childhood motor engram, worked on global balance, mobilised my nerve, encouraged cross cortical activity and turned my focus into functional improvement.

Further explanations for my experience comes from evidence suggesting that a peripheral adaptive pain state is initiated, whereby transcortical inhibition occurs by the contralateral hemisphere to the one which controls the affected limb. Additionally, excitation cortical (M1) drive of the muscles of the contralateral limb to the one which is in pain also occurs. In such cases re-establishment of motor drive to the affected side is important. In terms of tendon rehabilitation, external auditory and visual cues using a metronome have been employed and are showing promising results (Ebonie Rio et al 2017 Personal communication). In terms of my experience with the soccer ball tricks, the external visual cues and the cross talk from using left and right feet, head, shoulders, and chest during ball juggling manoeuvres, whilst calling the rhythm to the kids may have been the crucial factor to overcome the dysfunctional brain induced pain - muscle inco-ordination cycle, which I was in. Additionally, I was cycling which allowed me to focus on motor drive into the affected limb.

However, work by Lorrimer Moseley on CRPS has established that 'brain laterality' must be established before commencing trans-cortical rehabilitation techniques. Lorrimer's clinical interventions use 'mirror imaging' techniques which are only effective once the patient is able to discriminate the left and right sides of the affected body parts, presented visually, in various twists and angles.

Alternatively, the altered pain state can result in a hostage like situation, whereby the pain takes control. Similar to the 'Stockholm Syndrome' where the hostage begins to sympathise with their captors, so do some peoples brain states, where it begin to sympathise with the pain, creating an intractable bondage and dysfunctional state.

One screening question which may reflect commitment to the process of rehabilitation is to question whether they were able to resist the cookie jar when they were a child? Or were they committed to any sporting endeavours as a child? This may give some indication for the presence of motor engrams which can be used to overcome dysfunctional pain induced muscle synergies (neurotags), but also indicate an ability to be self disciplined, as well as being able to reconcile and identify goal oriented objectives, in spite of the cognitive pain processes? Remember that neurons that fire together, wire together.